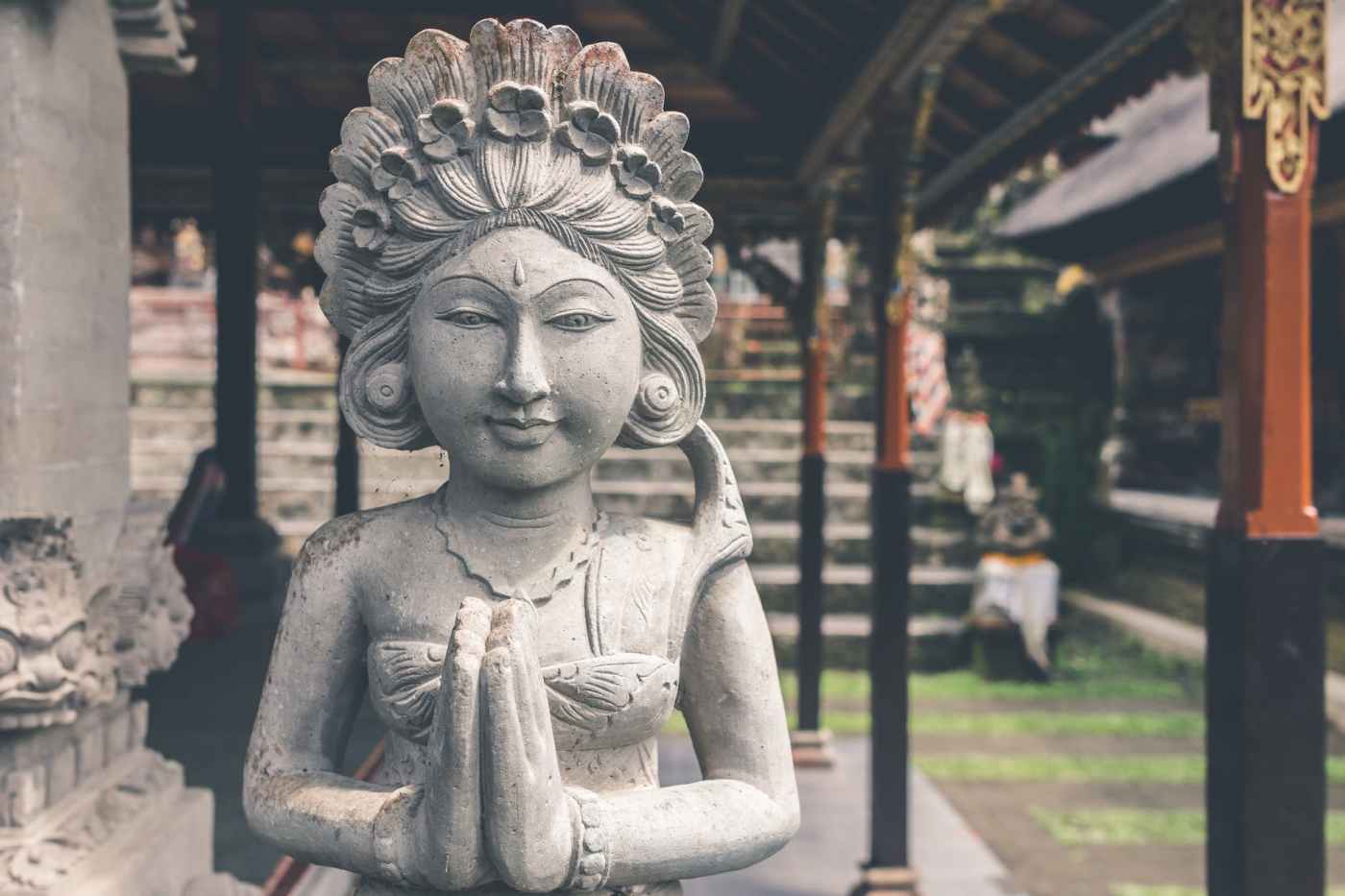 “Therefore, having been justified by faith, we have peace with God through our Lord Jesus Christ.” -Romans 5:1

I think you will agree that it is very easy to lose sight of what our Christmas season is all about. The parties, the shopping, the family time is all good, but really, why, very practically, did Jesus come to earth? Was He merely to spread a spirit of good cheer? Did He come to show us the way to love our fellow man or to be a good example of morality? What does He offer to all the peoples of our world? Over the next four weeks I plan to take a brief look at the four major religions in today’s world, and then show how various aspects of Christ’s incarnation and atoning work satisfy the craving these people are seeking in their religions. The first two religions, Hinduism and Islam, are pretty clear. The last two, however, may very well surprise you. These two other major religions are statism and secularism. Statism is a world view which trusts a governmental entity to be god, from cradle to grave. Secularism is a denial of God, or at least the relevance of God, in people’s lives.

First is Hinduism. There are at least 900 million adherents to Hinduism, primarily living in India and Nepal. There is no set, unified theology of Hinduism, but rather a number of different strands of it. It is also unclear as to when it began. Some say it began about 700 B.C. while others say it originated around 1500 B.C. The Aryans, a people of light skin color, who believed in the false god Vishnu, invaded India more than 3500 years ago and conquered the indigenous, dark skinned Dravidians who worshipped Shiva. The word Aryan means noble or royal and they considered themselves racially superior to others. To maintain the purity of their race, these Aryan invaders created their own social order and divided the community into what they called castes. The Hindu people (derived from the Sanskrit word Sindu, a river, more specifically the Indus river, thus people of the Indus) gradually adopted the Aryan notion of castes and gave it their religious sanction through the Hindu holy legal code called the Manusmriti. The Hindus believe, according to their holy book Vedas, that society is divided into four castes, each taken from a certain part of the body of the Hindu god Brahma (god of creation). The Brahmins were taken from Brahma’s head and thus are royalty, the priests. They are the only ones allowed to speak or read Sanskrit and to officiate at Hindu religious observances. The Brahmins have ruled India for 3000 years. About four percent of the Indian population are from the Brahmin caste. The Kshatriyas and Vaishyas castes, about ten percent of the population, are taken from the shoulders and stomach of Brahma and they are the rulers and business people of India. The Sudras or slave castes, were taken from the feet of Brahma (today they are called the backward castes), and comprise about fifty percent of the population. Their lot is to do all the menial labor. At least twenty-five percent of the Indian population are the so called untouchables. They are considered to be polluted and unworthy of entering the social or religious life of the society and do not even qualify as part of the caste system. Hence the term outcaste. They now call themselves Dalits, taken from the Sanskrit word which means broken. As untouchables the Dalits are forbidden from physically touching any member of any caste. To do so would render the caste person unclean by Hindu law. A Dalit should not even hear the reading of Hindu scripture in Sanskrit. If that happens he is to have boiling lead poured in his ears. Sometimes the Dalits are also called unseeables (those who are not to be seen by caste people) or unapproachables (those who cannot come near a caste person).

Like all religions of the world, the question Hinduism seeks to answer is—how is one made right with god? The Hindus call this Moksha. Perhaps you are more familiar with the Buddhist term Nirvana. Moksha, from a soteriological (salvation) perspective, means liberation, emancipation, release from the death-rebirth cycle of reincarnation. From a philosophical point of view Moksha means reaching self-realization, or fullness of life. So, how do Hindus believe one reaches Moksha? There are two ways. First is through suffering, and second, Moksha may come through total surrender to Krishna, one of the top Hindu gods. This is what the Beatles were after in the 1960’s.

While official numbers of Christians living in India still remains at one percent, most Christians I speak with in India say the number is more like ten percent or even higher, and that Hindus are converting to Christianity at a rate of one million per year. The reason the official percentage of Christians in India is so low is because most believers are coming from the Dalits, the poorest of the poor, and Hindu Dalits receive government aid in the form of a monthly supply of grain and cooking and heating fuel. In many of the states, when a Dalit converts to Christianity and informs the government authorities, he no longer receives the government aid. Hence the reluctance officially to change one’s religion.

And the increase in Indian Dalits converting from Hinduism to Christianity is causing socio-economic and political unrest in India. Many nationalist Hindus are pushing back at the inroads Christianity is making. Persecution of Christians is on the rise in various parts of the country and nationalist Prime Minister Narendra Modi of the Bharatiya Janata Party is leading the way, claiming that Christian missionaries are forcing Hindus to convert and that Christianity is undermining Indian, Hindu culture.

However, it was for freedom that Christ set us free (Galatians 5:1). Nearly a billion Hindu people, blinded by the evil one, living in darkness are seeking Moksha by suffering. They believe their poverty and its consequent suffering is due to sins of a former life, that they must be purged of those sins by suffering in this life. Perhaps eventually, after suffering many more hundreds or thousands of years, being reincarnated countless times, they eventually will be purged of their defilement and reach the emancipation of their souls. Or, perhaps they can reach it through complete submission to Krishna. We know, of course, that our suffering can never atone for our sins. We are not gods. We cannot save ourselves or anyone else. And we also know that no one can completely, perfectly live by total obedience and surrender. We cannot even obey our own laws, let alone those of God.

But there is One, my dear friends, who did suffer on our behalf. He was pierced through for our transgressions. He was crushed for our iniquities. The chastening for our well being fell upon Him, and by His scourging we are healed. The Lord has caused the iniquity of us all to fall on Him. Christ died for our sins, once for all, the just for the unjust, that He might bring us to God. There is One who totally surrendered to God. In the Garden of Gethsemane the Lord Jesus said, “Father, if possible, let this cup pass from Me. Nevertheless, not My will, but Thy will be done.”

The Hindu looks for Moksha through his own efforts but he will never find it there. But Paul the Apostle says, “Having been justified by faith, we have peace with God through our Lord Jesus Christ.” Hallelujah, what a Savior.

On January 22, 1999 Australian missionary to the poor and to the leper, Graham Staines, along with his two sons (aged ten and six) was traveling late at night in the Indian state of Odisha. They decided to get a little sleep in their car. A crowd of militant Hindus surrounded the car, poured gasoline on it and set it on fire. Graham and his two sons were burned alive. Graham’s wife, Gladys, remained in Odisha until 2004 with her daughter and then returned to Australia. Gladys was later given the fourth highest civilian award for her work amongst the poor.

Due to Christ’s great work of suffering and death, because of His willingness to surrender Himself to His Heavenly Father, Graham and his sons reached “Moksha”. Only Christ can accomplish right standing before God for us. Glory in the cross of our Lord Jesus Christ and make Him known with confidence, joy, and boldness. There is no other name under heaven, given among men, by which we might be saved.

At this time of year, as we celebrate the incarnation of our blessed Savior, give thanks to God for His indescribable gift and ask God to make Himself known to millions more Hindus as well as all the peoples of all the religions of the world. For there is one God and one mediator between God and man, and that man is Christ Jesus (1 Timothy 1:5).